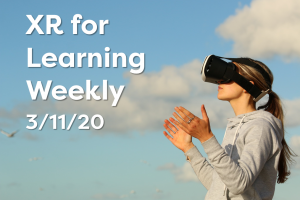 Augmented, Virtual, and other mixed reality technologies are rapidly emerging and advancing, creating new and exciting opportunities for training and education. XR for Learning Weekly collects some of the week’s best XR content that learning professionals can learn from.

XR for Learning is curated by the team that brings you Realities360, the premier AR/VR event for education and training professionals.

Demystifying VR Distribution Platforms by Jennifer Gallegos & Matt Sparks
Much of the attention learning professionals place on creating virtual reality experiences focuses on the creation of the VR content itself. But creation is just one part of the puzzle; the experience still needs to be hosted somewhere for access. This post by Jennifer Gallegos & Matt Sparks looks at the different types of platforms that can be used to host virtual reality content.

7 Ways Augmented Reality Is Changing Education Industry in the UK: The Future of Learning Is Now by Gurps Nijjar
Augmented reality is a new platform capable of creating interactions and experiences, unlike anything we’ve seen before. This post by Gurps Nijjar looks at a number of examples of how AR can be used to innovate education.

Three Totally Creative Uses of Quest Hand-tracking by Ben Lang
Most virtual reality applications use handheld controllers as a means of input and interaction with the virtual world. Oculus Quest recently released hand-tracking as a beta application, which enables your actual hands to be inserted into the virtual space. This is a paradigm-shifting change to how we see interaction in VR, and this post from Ben Lang looks at three early examples of it being used.

What’s the Difference Between webAR and Apps? by Nelson Phillips
Smartphone-based augmented reality has often been driven by native apps that are installed on someone’s device. However, in 2019, a new web-based option started to emerge called webAR. This post from Nelson Phillips looks at the differences, including the advantages and disadvantages, of the two platforms. 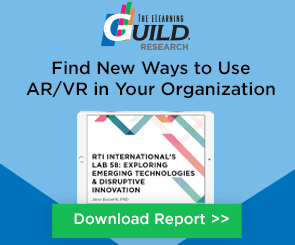 The best way for learning professionals to understand the possibilities of augmented reality and virtual reality is to explore examples of these technologies being used for education and training. In the latest Research Report from The eLearning Guild, RTI International’s Lab 58: Exploring Emerging Technologies & Disruptive Innovation, Jane Bozarth offers an overview of on organization that is doing a lot of cutting edge work in this space –  Lab 58

Numerous projects are examined in the report, each supported by RTI’s extensive resources for gathering and interpreting data and focused on developing relevant ways for utilizing new technologies. Examples of current projects include real-world cases of 360 video, AR, VR, and AI for healthcare, safety training, and reducing the need to transport materials to people or people to materials. Among the types of data gathered, in-app AR data, VR data, and data from wearables are of particular interest to the Lab.