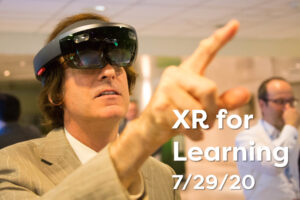 Augmented, Virtual, and other mixed reality technologies are rapidly emerging and advancing, creating new and exciting opportunities for training and education. XR for Learning collects some of the best XR content that learning professionals can learn from.

Why VR providers are pinning their hopes on profiting from ‘Zoom fatigue’ by James Bourne
Video-based meetings have become the norm during the pandemic, giving birth to the very real feeling commonly referred to as “Zoom fatigue”. This post by James Bourne looks at how AR & VR companies are pivoting their products and services to bridge the gap of human connections through virtual technologies.

How Do Consumers Really Feel About AR? by AR Insider
One of the greatest drivers of AR’s potential for L&D is how deeply AR is adopted by consumers in our everyday life. This post highlights research into how the general public is responding and adapting to augmented reality.

Oculus Quest 2? Everything We Know About Facebook’s Next VR Headset by David Heaney
Rumors of an update to Oculus’s popular Quest headset have been circulating for a while, with last week’s leak of photos of the reported device seemingly all but confirming the news. This post by David Heaney curates much of the reported news about the device, including how it will be upgraded from the current version. As Quest is a major driver of the mainstreaming of VR, the next version of the device will be very interesting.

OpenXR Now Certifying Headset & App Compliance, Adds Extensions for Hand-tracking & Eye-tracking by Ben Lang
Developing augmented and virtual reality applications can be challenging given the wide variety of devices that exist. This post by Ben Lang explores OpenXR, a royalty-free standard that aims to standardize the development of VR and AR applications.

The “War of Words” Taking Place in XR Technology via AR Post
The world of XR is rapidly evolving. One of the challenges of this evolution is ensuring that all the stakeholders, from hardware manufacturers to software developers to consumers, are all using the same language when talking about their work and experiences. This post examines why the current lack of standardization is creating a hurdle in XR adoption.

More from XR for Learning

Want to take a deeper dive into virtual reality and augmented reality for Learning? Here’s two ways to keep on top of XR for Learning.