You are here: Home › Community Perspective › Countdown to #DevLearn: Exploring What Creativity Is with Lynda Barry 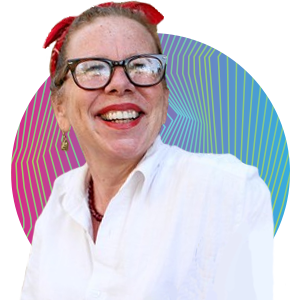 At this year’s DevLearn Conference and Expo, we’re excited to welcome Lynda Barry who will explore the wonderful world of creativity, art, learning, and try to identify “What it is” that connects these worlds.

I had the pleasure of chatting with Lynda and exploring her different roles and work, and how creativity is, in many ways, the foundation of everything she does..

DK: I can honestly say that in all the years I’ve been hosting conferences, I don’t think I’ve found it as challenging to answer the “So what does this keynote do?” question, mainly because you’re involved in so many things. Focusing on your work as a cartoonist and comic artist seems incomplete, but describing you as an artist and educator, while accurate, seems to only scratch the surface. That makes me curious – how do you describe yourself and the work you do?

Lynda Barry: Well, I do a lot of things; I’m mostly known as a cartoonist but I also teach. I’m a professor at the University of Wisconsin-Madison and even the University had a hard time saying what it is I do and they made up a position for me and my official title is Associate Professor in Interdisciplinary Creativity and I think that had actually kind of nails it.

I’m really interested in the nature of creativity and the thing that I research and care a lot about is what the biological function of this thing that we call the arts might be. But all these things have something… everything that I do, whether it’s cartoons or making a play or writing a novel, I’ve done all of these things; to me, they’re all very similar because they’re all tied around some kind of interaction that has something to do with images. I think that’s the easiest way for me to put it.

That brings us to the question of what is in the image and that’s something I’m really curious about; I keep on wanting to tell this story as an example…

One day I was walking around downtown like I do and people were really being nice to me and waving and being really wonderful and I was thinking “still got it, apparently”. But no, it’s because I was wearing a Chewbacca t-shirt; I was wearing a t-shirt with Chewbacca’s head on it and people are so crazy about Chewbacca that they started treating me nicely just because I had to Chewbacca’s head on me. But that has something to do with the nature of images. They’re kind of driving forces on people’s lives that we don’t necessarily notice all the time.

DK: It’s interesting that you share that example. I remember a couple of years ago, my son, who was about five at the time, was sitting on the floor drawing and he said, “Dad come draw some monsters with me”. I went and sat down with him and we have this huge poster paper – he’s on one side and I’m on the other – and he was drawing and he goes, “Dad what are you doing?” and I said, “I’m thinking about what I’m going to draw”.

DK: And he looked at me puzzled and said, ‘Just draw Dad’. It just struck me that somehow as adults, we lose that.

Lynda: That’s exactly right. You’ve nailed it and the five-year-olds, in particular, are really some of the best drawing teachers. I even started a program where I paired my students, who were Ph.D. students and Masters students with four and five-year-olds as co-researchers; because a five-year-old can say something like “just draw Dad” and you get it.

There’s something about their realness, but up until about the age of 6 or 7 – actually it’s about 8, kids look at a piece of paper as a place for an experience;.  Adults look at the paper as a thing that is either going to be good or bad once they start drawing. Most people are so embarrassed and miserable and scared about drawing which is really interesting to me; about why whittling a pen on a piece of paper would make somebody so terrified.

But this idea that you’re supposed to know what you’re going to draw before you draw that turns out not to be… [Chuckles] That’s not an easy way to make a drawing. Your son was absolutely right; he nailed it.

Another example is dancing, if you first think about every way you are going to move every part of your body, you just can’t dance that way.

DK: That probably explains why I have the same challenges with dancing as I do with drawing.

Lynda: [Laughs] And don’t you notice that in both those situations your body tenses up?

Lynda: And then singing in front of people also causes people to tense up. But if you look at, all these things that people feel like they can’t do; that they’re just not good enough to do. But if you start hanging around with a three-year-old, everybody will dance; they’ll sing; they’ll make little sculptures even if they’re just going to knock them down; they’ll tell stories.

DK: So, I’m curious; from your standpoint, what… I know, this is a very broad question, so feel free to answer it any way you like, but what is creativity to you?

Lynda: Creativity-I think about it all the time; and I’m always stumped… I can easily talk about what isn’t creativity.

Lynda: [Laughs] It isn’t arts; although it often involves the arts. I think it’s a way of being in the world. So… this is what it is.

Remember when you’d be eating cereal at the table when you were a kid and while you’re eating the cereal, all of a sudden, you’d be reading the cereal box and it would look really fascinating and you start reading the ingredients on the side; you know what I’m talking about?

Lynda: It’s the cereal trance… everybody knows about it and what’s really weird is it goes from eating this cereal to all of a sudden,  the ingredients on the side of that box of cereal look really fascinating and you just read it with this kind of presence, like you’re there… and that to me is creativity.

You know I always talk about the top of the mind and the back of the mind. There’s a lot of really interesting science behind these two different states of mind. So what I’m always interested in when I’m working with people is to show them how to get to that state of mind. Usually you have to do it by making something, or doing something. There’s always an element of anxiety in it as well if you’re going to make or do something; but I have a hard time saying what creativity is; I always love to ask people what they think it is, and nobody can answer.

There is a terrible definition, which is: it’s the invention of something that’s both useful and novel; but it’s a terrible explanation because creativity is useful but that’s not what it’s about; it’s not about making something that somebody can use.

DK: I work with people who build education and training programs. Creativity is very much embedded in the work that they do. Creativity is such an important component in learning and I struggle with the definition of creativity myself, so sometimes I try to think of what did it looks like in action, and how can we get people to engage in those sort of activities.

It becomes a “What came first, the chicken or the egg” type of thing – is creativity based on curiosity or curiosity based on creativity, which one comes first? As an educator, are there things that you specifically do to try and spark that creativity in the people that you’re helping learn?

Lynda: Absolutely! Well, this brings us back to why it’s such a difficult question to answer; because to ask what is creativity without any context, there’s really isn’t any answer. What is it in being an educator? There’s a lot of ways to answer that.

One of the things that I do in my in my classroom, for example, I just do some really basic things. For instance, giving somebody a specific time limit to make a drawing, or to write a story.

What that does immediately, the minute you give a time limit like, “you’re going to write this story and it’s going to take you eight minutes and I’m going to tell you when you’re halfway there”,  is it starts to provide this structure, or this sort of trellis, for the story to vine around. That eight minutes provides the structure… the limitation itself provides structure so that you don’t have time to sit around and go, ‘I wonder what I’m going to draw,’. It’s like, you have to get going.

And also, because there’s a time limit, there’s also a beginning, middle and an end. So it actually starts to take… I mean, things start to take a story structure; they’ll have composition, and it will happen naturally by introducing a time element. And we all know that from being on deadline, where it just seems like it’s not going to happen; it’s not going to happen; and then somehow it happens.

DK: I love the answers you given me especially given the constraints of a brief conversation. I’m looking forward to having you join us at the conference and having more time to explore what this “it” is that you’ve described in your work at our keynote here at DevLearn this fall. 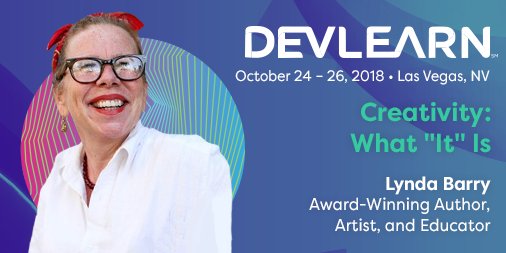 Want to learn more about what “it” is and how to harness the power of creativity in your work? Be sure to join us for Lynda’s keynote at DevLearn this fall!