You are here: Home › Industry Insights › 5 Surprising Things I Learned from a Few Days of Virtual Reality

After years of existing mostly in the world of science fiction, virtual reality is finally ready for its close up. With ‘VR’ normalizing itself within the consumer culture, the interest in using these technologies for learning and performance is growing.

The best way to learn about VR is to experience it for yourself. I’ve been exploring the world of VR for a few weeks now, with an eye towards the possibilities and applications for the technology in the worlds of training, education, and learning. I’m looking forward to sharing my reflections and thoughts in the weeks to come.

This initial post explores some the surprising things I learned after my first few days exploring these technologies.

VR Can Be Locally Social

The very nature of VR technology is an individual experience. One person puts on a headset that literally blocks out the real world to virtually transport you into a new one.

I expected VR to be an individual experience, with the only multi-person interaction coming from other online players. The only social experience I truly expected from people actually in the room was the enjoyment and laughter of watching each other engage in VR experiences.

I was pleasantly surprised to be wrong in this assumption. While the majority of games and experiences I have been exploring are indeed solo experiences, a few were social experiences that engaged not only the person with the headset, but also others in the room. 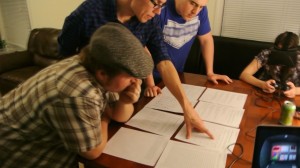 Take a game like Keep Talking and No One Explodes. The premise of the game is simple: The person with the VR headset is presented with a bomb that needs to be disarmed. But unlike most games where the other people in the room watch a screen that displays what the VR player is seeing, in this game the screen displays a multi-page bomb-disarming manual (or players can print a PDF of the manual and explore it on paper). The VR Player describes what he or she is seeing, and the other people in the room explore the manual to find the correct way to disarm the bomb, coaching the VR player on what to do. It’s a truly collaborative and social experience that has great applications for learning.

You Only *Think* You Understand VR

At a recent conference I gave a talk about VR and I suggested that the term “virtual reality” isn’t specific enough any more. There’s a huge (and growing) variety of devices available, from basic applications like Google Cardboard to complex systems like HTC Vive and Oculus Rift.

For a growing number of individuals the concept of virtual reality is defined by the smartphone-driven VR experience. It’s the most accessible, driven by the technology most of us are walking around with in our pockets. However, it’s also the least immersive form of VR. There are different levels of immersion in VR that are driven less by the technology worn on your head, and more on the technology held in your hands.

Take Google Cardboard as an example. Your hands are holding the device when you engage in those experiences. It’s immersive, mostly in a passive way. But that’s how most people experience VR.

My kids are often my technology guinea pigs; I learn much by watching them experiencing things. They’ve enjoyed countless Google Cardboard VR experiences, but the first time they tried PlayStation VR, using wands that put their hands into the virtual world… they lost their minds. 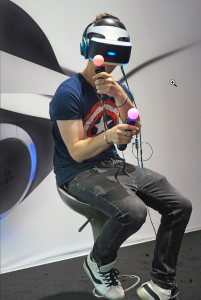 Cognitively they knew what to expect. They knew what VR was and even knew that the wands were going to be their hands in the VR world. But that knowledge did not prepare them for what the experience was like. They didn’t truly understand the level of immersion it would create until they experienced it.

VR is More Than Just Games

The majority of the immersive consumer VR technologies available today are based in the world of gaming. I expected this and have enjoyed looking at how the gaming world is sharing experiences with these technologies, and seeing the road for educational, training, and learning use being paved along the way.

I’ve been pleasantly surprised by the amount of non-gaming applications that are available on these platforms. Even PlayStation VR – an add-on to an actual video game system – has a few non-gaming apps available. It’s interesting to see all of the different ways people are experimenting with VR.

An example I found fascinating is explores Autism. It’s a short 360-video experience that puts you in the shoes of someone with autism. What might at first seem like an everyday walk in the mall is now shown to be something entirely over-stimulating and distracting. I was floored by the way the technology was used to help me understand and be empathetic to those with autism.

While I think VR enhances this tremendously, this 360-video gives you a glimpse into the experience.

I expected VR experiences to be created with a first-person perspective in mind, and most of them are. But a few experiences were different, some even taking a tried and true experience and redefining it through VR.

Take the experience of a video game platformer – think of games like Super Mario or Sonic the Hedgehog- in which you control a character that explores an open world. I was surprised to discover the these third-person experiences not only work well in VR, they can be enhanced into something more.

In the game Lucky’s Tale, you control your character just as you would in a typical Mario game. But the immersiveness of VR takes things to all new levels of engagement, adding some VR-specific play elements along the way, even though the core mechanics of the game are largely unchanged. I wasn’t expecting that type of experience to translate well into VR at all, let alone be enhanced by it.

A New Appreciation For Scale

There’s a VR level in Star Wars Battlefront on Playstation VR that all fans of the films should experience. It’s an amazing experience that truly makes you feel like you’re in a Star Wars movie. And as much as I love playing the level, there are times I find myself stalled at the title screen that appears when you launch the game.

The screen is actually pretty barren, with no background and just a huge open white space. But you hear the familiar sound from The Empire Strikes Back – that of an AT-AT walking. You turn to the left and there it is… big as life and seeming over 60 feet tall, walking over you.

It’s a site to behold, but what I enjoy more is watching others experience it for the first time. When they hear the sound their head turns left, and then almost instantly shoots up as they call out in surprise at seeing this enormous machine walking over them.

The ability to convey scale is something that VR does incredibly well, and is another thing you can’t truly appreciate until you experience it.

Even though Virtual Reality has existed in various forms for decades, it’s emergence as a viable consumer technology is still in its infancy. There are huge applications for training, education, and learning that are truly exciting to explore. I’m looking forward to sharing what we learn through our experiments here in the eLearning Guild Blog, on my personal blog, and in other spaces.

I invite you to join us in this journey and share your reflections as well.

Interested in taking a hands-on deep dive into VR, AR, and like technologies? Consider joining us in San Jose this July for Realities360, a first-of-its-kind conference proving hands-on opportunities to explore and make sense of these emerging technologies.