You are here: Home › Community Perspective › How I Blog – Bianca Woods

In this post we hear from Bianca Woods, Advisor, Design and Communication at BMO Financial Group, whose tweets and blog reflections of what she’s learned at conferences are a great resource to extend conference learning. 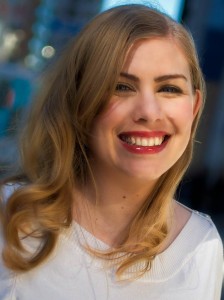 Some people’s blogging origin stories begin with a noble vision. Maybe they wanted to write mind-changing articles or shift the way people saw our field. Mine, though, had a far less inspiring start: I was bored out of my skull in Vegas.

It was 2012 and I was about to attend DevLearn for the second time. The previous year I had come to the conference with a co-worker and the two of us had had a fantastic time attending sessions during the day and then excitedly spending each evening discussing how we could apply what we’d learned back to our jobs (yes… we’re nerds… we’ll both own that). This time, though, I was on my own. And while I knew the conference itself would still be amazing, I was very aware of how much I was going to miss having that chance to debrief each day with a friend.

And so, I did what many tech-loving nerds would do in my place: I turned to social media. I promised all my co-workers that I’d help them attend the conference with me by live tweeting the sessions I went to and blogging my reactions to each day. That way I could help them find out about the cool things I was seeing at DevLearn and I could get a chance to chat with them online about the experience as it was happening.  Sure, I hadn’t really figured out Twitter at all at this point, but I at least had a reasonable sense of how to blog (turns out there was a use for all those years I’d spent on LiveJournal after all) and I figured I could get the gist of Twitter along the way. I created a brand new blog, gave my co-workers my Twitter handle, and set off on an experiment.

The first day at DevLearn I dove headfirst into live tweeting sessions and quickly discovered what a conference backchannel was. While I didn’t hear a lot from my co-workers (I probably should have picked a social media tool they were, you know, actually using) I did begin chatting with a ton of other conference goers on Twitter. I kept busy during the day by attending sessions and bouncing ideas off of the backchannel, but my nights were still completely plan-free. The “charms” of Vegas were, and still are, pretty lost on me, and so instead I spent the evenings in my hotel room reviewing Twitter and writing detailed blog posts about each session I attended. Sure, it maybe wasn’t the typical Vegas experience, but I have to admit I had a great time.

And while it was a habit that came out of boredom, it turned out that blogging in the evening helped me get way more out of the conference. Taking the time to chew on everything I had seen during the day, review my own tweets again, react to other people’s comments in the backchannel, and summarize everything in a blog post for my co-workers back home helped push me to make connections I wouldn’t have seen otherwise and just retain more of what I had learned each day. And what was cool was that, thanks to Twitter, other people were reading those blog posts too. Turns out I was reaching way more people than just the few folks back home, and they were pretty glad to have someone giving them a peek into what was happening at the conference.

And that’s why when I went to my next conference I made sure to blog about it… and the next… and the next again. While I’ve played a bit with the format (I’ve been trying out video recaps instead of text as of late), this core process of tweeting, reflecting, and blogging has stuck with me. While I don’t think there’s a magic formula for conferences that works for everyone, this is definitely the one that works best for me. Each blog post gets me to think more deeply about what every speaker said and figure out how to explain their key points to others.  And I’d definitely say that knowing I’m pulling these posts together for other people motivates me to be even more thorough and thoughtful in what I write.

Plus, there’s one more perk of blogging that’s probably the best out of all of them. Writing all those posts helped me meet a ton of fascinating people in our industry. It turns out that if you’re willing to simply share what you’ve learned with our community, you’ll be amazed at how much they’ll want to share back. You can build an incredible worldwide network of people who share the same challenges and interests as you this way. In fact, that’s why, while I may still find Vegas kind of boring, I’m excited to go there for more than just DevLearn itself. Sure, I’ll be in a city that bores me, but thanks to the connections I’ve made online, I’ll at least be in a city that bores me with friends.

Want to share how you use your blog for learning and at conferences? Contact David Kelly to learn how to contribute to the “How I Blog” series.

One Response to "How I Blog – Bianca Woods"